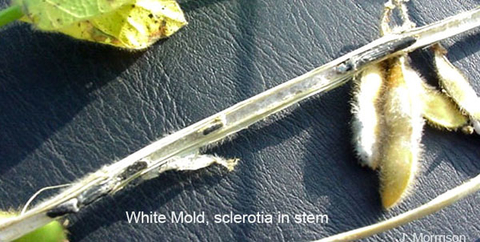 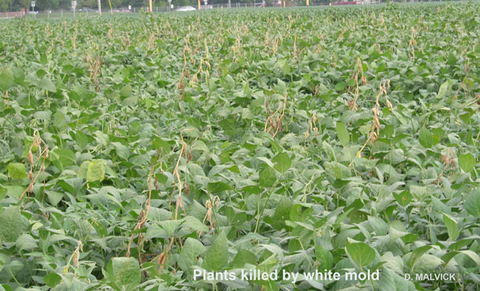 White mold (also named Sclerotinia stem rot) is a common and destructive disease that tends to be sporadic across the northern U.S and Canada. Although it can be a serious problem in many areas, certain areas are more prone to this disease than others. For example, in the central Midwest white mold is especially common in SE Minnesota, NE Iowa, and NW Illinois. White mold is favored by prolonged wet and cool weather when the plants are flowering in July. This disease is difficult to manage and resistant varieties are a partial solution to this perennial problem.

Lesions usually develop first at stem nodes during or after flowering. The lesions expand and the tops of the plants become grayish-green and then wilt and die. Infected stems often become soft and watery, and become covered with white moldy growth in moist conditions. Dry, dead stems can develop a bleached, white appearance. Hard, black sclerotia that look similar to rodent droppings develop on or inside infected stems and pods. Scattered dead plants can often be seen standing upright in affected fields, or plants can be killed in patches.

The occurrence of white mold varies widely from year to year and from location to location depending in a large part on weather conditions. Wet and cool weather during flowering is required for this disease to develop, and plants are usually killed after closure of the plant canopy. Other factors that may favor development of white mold include high plant populations, high fertility, narrow rows, protected fields and parts of fields where plants dry slowly, lack of air circulation under soybean canopy, and possibly early planting. Tillage has not been shown to be consistently associated with this disease. 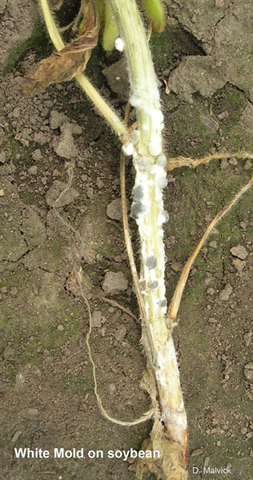 White mold is caused by the fungus Sclerotinia sclerotiorum. This fungus survives from year-to-year in soil or stems in the form of hard black masses of mycelium (sclerotia). The sclerotia germinate near the soil surface to form small tan-to-gray mushroom-shaped structures called apothecia, which produce ascospores that spread via air currents to infect dead soybean flowers. The infection then spreads into the stems. Seed lots can be contaminated with sclerotia, and seeds can be infected with the pathogen. The host range of this pathogen includes many broadleaf crops and other plants, but not corn or small grains.

Selection of soybean varieties with some level of resistance to white mold can be helpful in managing this disease. Low plant populations or wide rows may help to reduce white mold severity, but these tactics do not always make a difference. Where irrigation is used, reduce irrigation frequency during flowering . Seed should be free of Sclerotinia contamination and infection. Long-term rotation with corn or small grains may reduce white mold. Foliar fungicides may be helpful, but have generally performed inconsistently and may not be economically beneficial for managing this disease.