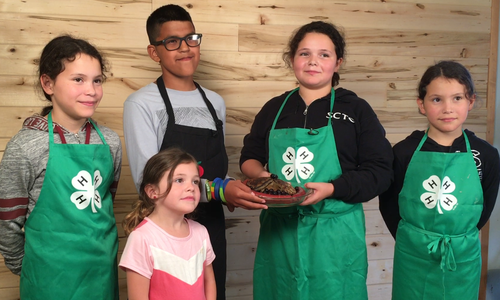 The program launches September 13 with a meal kit specially crafted by the White Earth 4-H club. During a summer focused on learning about traditional native foods, youth in the club developed and tested a wild rice pancake recipe, which is pared in the kit with local bison sausage, blueberries, maple syrup and a traditional roasted dandelion tea.

The kids were very busy gardening and cooking this summer,” said Dana Trickey, University of Minnesota Extension 4-H program coordinator. “I'm so proud of these young people. With the right support and encouragement, the sky is the limit for our youth.”

As a culmination of their learning experience, the 4-H youth made a step-by-step video for making their pancakes.

Partnerships for a healthy community

Extension 4-H is just one of several contributors to this season-long effort to get more healthy native foods in the hands of Minnesotans. Ryan Pesch, an organic farmer and board member of Manna Food Co-op and Zachary Paige, director of food sovereignty with the White Earth Nation have been in close collaboration throughout the project. (Pesch is also an Extension employee.) Local native cooks and chefs developed every recipe with assistance from Sean Sherman, author of The Sioux Chef. The effort is financially supported, in part, by Blue Cross Blue Shield of Minnesota.

The organizers are promoting five meal kits throughout the fall, which can be picked up at a variety of locations throughout White Earth or at Manna Food Co-op in Detroit Lakes. Interested customers can learn more at www.mannafoodcoop.com/traditional.