COVID-19 didn’t stop 4-H'ers from exploring the performing arts this summer. This year's activities looked a little different but delivered the same high-quality learning experiences as they always do. 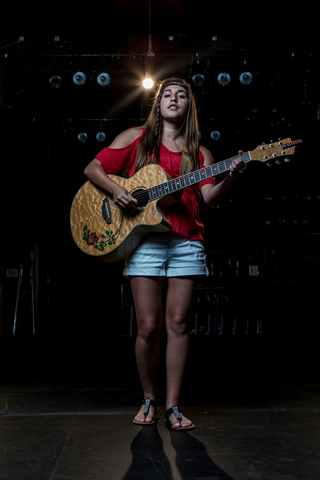 Over the summer, more than 150 youth from across Minnesota grabbed the chance to express themselves and learn all about the performing arts. They made costumes that would withstand a dance routine, explored how to create an authentic accent, designed the lighting and sound for a show, wrote scenes, designed stage sets, and gave each other constructive feedback.

"It was a 360-degree view of theater and the arts," said Extension educator Karen Beranek. Seven 4-H'ers helped develop 4-H Performing Arts at Home, drawing upon the expertise of various alumni now working in theater arts.

4-H educators hosted eleven online sessions between June and August. Each focused on a different topic, from acting to stage crew to administration.

Jimmy Suess, a ninth-grader from Mazeppa, took part in as many as he could. "It was amazing," he said. His two favorite topics were accents (British and New Jersey) and creating a character. "We had to dress it up and make it so they were really original. I also enjoyed looking at other people's designs," he said.  As a participant with past performing arts experience, Suess led others in small group work during each session. The best part of all, he said, was being with lots of fellow art enthusiasts and meeting new people from across the state.

Jimmy loves acting, but he said he knows that the skills he learns in 4-H performing arts -- imagination, creativity, and adapting to any situation -- will be useful no matter what career he chooses for his future.

If you have ever been to the 4-H Building during the Minnesota State Fair, you have probably seen a State Arts-In performance. These are youth-produced, original musical plays with costumes, a band, and a tech crew. This year, youth and volunteers, in collaboration with director Kristin Delp, re-imagined this perennial state fair experience into a new version that delivered the same high-quality learning in a virtual format.

As always, participants experienced teamwork, leadership, goal-setting, a strong sense of community and shared a single goal: to put on a musical show. State Arts-In 2020 is a 15-minute edited video shot at all performers' homes, with critical support from -- as usual -- musicians, costumers, and technical crew.

One of the benefits of 4-H performing arts experiences like State Arts-In is the connection to future careers. Youth musicians, performers, tech crew, and costumers up their game when faced with the challenge of producing a show in a short period of time. They not only learn public speaking skills, but also creativity, improvisation, and teamwork. The skills they learned support them in non-theater careers, too.

Future careers youth discover can be inside or outside the theater. "One of our participants, a senior, decided during the summer that he wants to study music education in college," Delp said. Another is now majoring in graphic design at the University of Minnesota and hopes to work with young people. Some alumni are working in theater, including a few assistant directors of this year's program. One of them is a professional costumer in Dublin.

Delp said nobody knows what next year will be like for State Arts-in but prepping for this year's show helped them to gain some video skills that they might use even for on-stage performances. Stay tuned for the next episode.

Each year, 42,000 Minnesota youth explore communication and expressive arts programs in 4-H. You can support 4-H performing arts experiences through a gift.