Rabbits, owls and moon rocks are all in a day's work Most jobs don't involve inviting rabbits and owls to a museum. For Tim Caines, it's all in a day's work.

Tim is a 4-H program coordinator in Duluth with a passion for science learning. He recently invited a 4-H'er to bring her rabbits to a science learning day at the Duluth Children's Museum. He invited an official from the Lake Superior Zoo to bring owls later that day for the same group of youth. They got an up-close look at the animals to learn the characteristics of prey animals and predator animals and the tools each uses. In doing so, Tim drew upon children's natural interest in animals to draw them into science learning, and into 4-H. 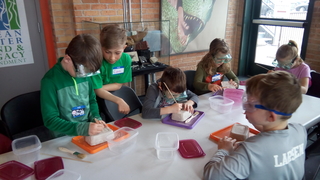 Like the young people in his 4-H programs, science drew Tim into 4-H. He started his professional life as an elementary school teacher, specializing in social science. He switched to youth work when he joined Boys and Girls Clubs in Duluth. Tim started as a 4-H program coordinator in south St. Louis County four years ago.

Tim said that as a teacher, he was drawn to 4-H because it give him the chance to do science activities with youth. But more than that, he said, "It develops the whole person and prepares them for life." 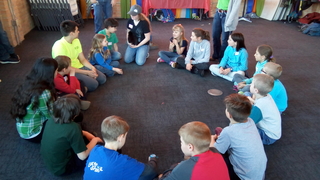 Tim believes STEM learning is more than important - it's essential. "It's a 21st century skill. It's the way all jobs are going," Caines said. "Schools do focus on science, but they don't do as much with science as they do reading and math. Statewide, our students do ok in reading and math testing, but science scores are not as good. That's because STEM education requires more time than they have during a school day to work with projects and to get the experiential learning. That's a perfect fit for 4-H, because that's what we do."

"The goal is to help youth become better adults and citizens. The activities are just the means to do that. We're not just here to help kids get to the fair, we're here to show them sportsmanship, responsibility and fair play. Name all the qualities that you want adults to have. Kids can learn them in 4-H,” Tim stated. The future of the program is bright. Tim and others are working to grow a youth-teaching youth science program in which teenagers build their leadership and science skills. The STEM ambassadors are 10 youth in grades 9-12 who deliver a science learning program to younger people at the Children's Museum in Duluth. Supported by 4-H staff, the youth deliver the curriculum. "They actually teach it," Tim said. He hopes to expand that program beyond the walls of the Children's Museum in Duluth to other locations.

Also coming soon - MOON ROCKS! Tim discovered that NASA has a lending library of moon rocks for certified educators across the country. He's pursuing the opportunity, which requires him to become certified in handling them. Youth in the Duluth area can look forward to learning about natural world around them and outside our planet. As they do, they will also be gaining some lifelong skills.