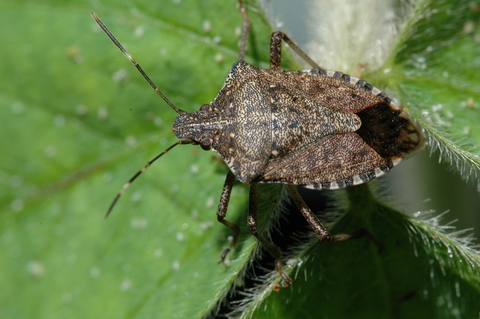 Brown marmorated stink bug (BMSB) is an invasive insect, first found in Minnesota in St. Paul in 2010. It has since been discovered in 23 additional counties. This insect is easily moved, especially in boxes and vehicles, and can eventually spread to all parts of Minnesota.

This species feeds on more than 170 different plants, both ornamentals and agricultural crops, including apples, soybeans, cherries, crab apples, sunflowers, eggplant and tomatoes.

Their feeding can cause severe damage.  Minnesota is just starting to see economic injury to crops, including apples.

BMSBs are also a problem because they get inside homes and other buildings as they seek shelter for the winter.  They can do this in large numbers, similar to boxelder bugs, and be a nuisance indoors.  While they are not welcome in our homes, finding them there can help fight BMSB in our state.

A big part of the battle with BMSB is knowing where they are located; it is not always obvious when they first arrive in an area. Because early detection is critical when fighting BMSB, the sooner they are recognized, the sooner action can be taken against them.

Stink bugs can be confused with other insects.  To make sure you have a stink bug, look for the following:

A brown marmorated stink bug has the following characteristics:

You can check out where BMSB has been found on this map from the Minnesota Department of Agriculture (MDA).

If you find a suspected BMSB in a new area, report it to MDA through Arrest the Pest.