Have you seen white or brown blotches on the fruit in your garden and wondered what it is? It may be sunburn.

Hot weather, strong sunlight and low humidity are a recipe for sunburn on fruit crops. However, another ingredient is at play here too: a lack of shade on the fruit itself.

Sunburn can happen during any stage of fruit development if the conditions are right. While fruit plants need sun to ripen the fruit, too much direct sunlight beaming down on the fruit during low humidity can cause the fruit to burn.

Sunburn on fruit crops shows up as large white or brown blotches on the side of the fruit that is directly exposed to the sun. The specific symptoms depend on the type of fruit. 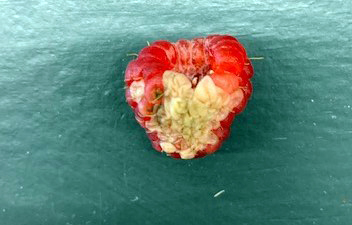 On raspberries, sunburn shows up as whitening on the fruitlets or “drupelets” of the raspberry. After some time, the white areas may dry up. The affected area will also be hard and unpalatable.

If most of the berry is still red and ripened normally, the berries can still be used. Affected fruits are still safe to consume. It is up to the individual gardener to decide how much sunburn they are willing to tolerate.

On apples, sunburn looks like browning on the side of the fruit that is most strongly exposed to direct sunlight. This is called “sunburn browning.”

If temperatures exceed 90℉ in combination with direct sunlight, apple fruit can also begin to rot at the location of the sunburn. This is called “sunburn necrosis.” Necrosis is not as common as sunburn browning in Minnesota because temperatures do not frequently exceed 90 degrees. However, parts of Minnesota did experience these extreme temperatures earlier this month.

On grape clusters, sunburn looks like a white, brown or yellow blotch on the side of the cluster that is directly exposed to sunlight. This happens more often on the south- or west-facing sides of a grapevine.

The blotch may be soft at first, but after a period of time, the blotch dries up and creates a berry that is hard on one side and partially mummified. Sunburned grapes do not ripen as well as normal grapes, and are not as good to eat or make into wine.

Because grape clusters ripen better with some direct sunlight, we often recommend that grape growers remove some of the leaves around the clusters if the canopy is very thick. However, leaf removal should be done conservatively, and the leaves must be taken off early (before mid-July) so that the shaded clusters are not suddenly exposed to strong sunlight late in the season.

Removing a lot of leaves around the clusters now, in late July, can cause sunburn to clusters that developed in the shade and are not accustomed to so much sun. If leaves are removed now in order to help the grapes ripen, only take off one or two leaves on each shoot, so that the clusters are still partially shaded. This will reduce the risk of sunburn.

If brown, soft spots are observed on many berries on a vine, and are on all sides of the cluster rather than just the side exposed to strong sunlight, it may be due to a disease such as black rot or anthracnose. Refer to the Growing Grapes in Minnesota guide for more information on recognizing grape diseases.

The most immediate solution for preventing sunburn on fruit like apples and berries is to drape a shade cloth over the plants to decrease the amount of direct sunlight hitting the fruit. This solution is straightforward and can be done in the middle of the season.

Another longer-term strategy is to provide adequate nutrients (especially nitrogen, phosphorus, and potassium) to the plants, to support strong canopy growth. An unhealthy plant with too few leaves may leave fruit exposed to too much sunlight. Fertilizer should only be used at certain times in the season, and the timing depends on the crop.

Finally, trees or fruit plants can be watered using overhead irrigation like a sprinkler or hose during hot temperatures. This helps because it creates “evaporative cooling” - in other words, as the water evaporates, it decreases the temperature around the fruit. This method is not for everyone, because it requires small, frequent sprinkler application throughout the period of hot temperatures. Still, some gardeners may be interested in trying this if they are already at home and want to see if it works during a very sunny, hot spell.

For more information about growing fruit in your home garden, see growing guides for fruit crops.