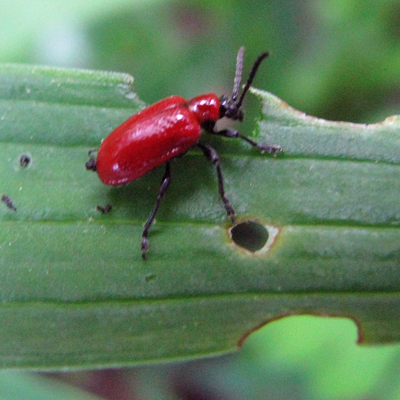 The Minnesota Department of Agriculture (MDA) has confirmed that the lily leaf beetle, Lilioceris lilii, has been identified in Minnesota for the first time. Discovered in St. Paul, a resident noticed an unusual insect on an Asiatic lily and reported it to MDA. MDA staff inspected the area and found an adult lily leaf beetle.

The adults are distinctive. While they are small beetles, about 1/4 inch long, they are bright red with a black head, antennae and legs. They do not have any stripes, spots or other markings on them. They are present in gardens from May to September.

The larvae are greenish to orangish with a dark-colored head. They are slug-like and up to 3/8 inch long. They are interesting because they put excrement on their backs to camouflage themselves. They are active May to June.

Adults and larvae chew holes in the leaves and also feed on stems, flowers buds, and flowers. Their feeding can defoliate and severely damage plants.

A native of Europe and Asia, this beetle was first found in North America in Montreal in 1945 in bulbs. It wasn’t discovered in the U.S. until 1992 that it was confirmed in Massachusetts. It is presently known in 15 states. Although it is most common in the Northeast, it is also now found in the Upper Midwest including Wisconsin and Iowa.

Because this is a new insect in Minnesota, the MDA would like to understand where in the state this insect is. Residents can report suspected lily leaf beetles to Arrest the Pest at arrest.the.pest@state.mn.us or 1-888-545-6684. Please include clear photos if possible.