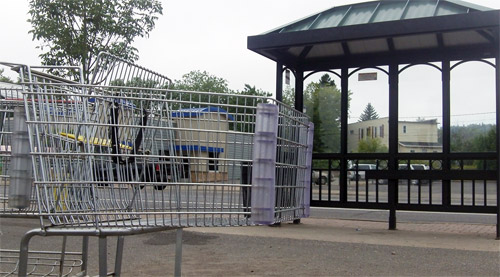 "I watch the increase in people, mothers with children, handicapped men and women walking by my house. [They carry] Super One bags of groceries many miles back to their homes. I have cried many times watching them struggle in the snow and rain …"

"It would be great to have a grocery store here. There are many low-income families here with limited transportation. Only expensive convenience stores without healthy food choices."

For years, residents of Duluth's Lincoln Park have talked about the lack of easy access to full- service grocery stores in the neighborhood. Then, in 2011, research conducted by John Bennett of University of Minnesota Extension and Adam Pine of University of Minnesota-Duluth (UMD) captured the conversation and put solid numbers behind the community's understanding of the situation. Now, their research is driving community action to find solutions to Lincoln Park's food access problem.

One number that stands out in the Pine-Bennett study is $5.3 million. That's the amount of money the study authors estimate Lincoln Park residents spend annually at grocery stores outside the neighborhood. In economists' language, that's a "leakage factor."

"That's money going out of the community," says Pine, professor of Geography and director of the Urban and Regional Studies Program at UMD. "I think that was an 'ah ha' moment for a lot of people," he adds.

"People knew that food access was an issue, but they didn't know the extent," says Bennett, a Community Economics educator with Extension's Center for Community Vitality. "We documented the extent, and presented a picture of what the actual problems were. That kick- started a lot of activity."

Since a report on the Pine-Bennett study was published and presented, Duluth community groups have used findings to obtain funding for neighborhood planning and to organize efforts for bringing fresh, healthy, and affordable food to Lincoln Park (also called West End).

One such effort is the Fair Food Access Campaign, launched earlier this year by four non-profit community organizations, including the Healthy Duluth Area Coalition (HDAC). According to Lisa Luokkala of HDAC, the groups secured a $25,000 grant from State Farm Insurance for the campaign, thanks in part to the Pine-Bennett study.

"The report helped us leverage those funds to do more extensive community engagement work in Lincoln Park to get community buy-in for solutions," Luokkala says. "The value of the [Pine- Bennett] study is that it provided useful data and presented it in a way the community could understand. Plus, John and Adam were willing to come in and talk to the neighborhood about the study. They built relationships with us so we can take action."

The U.S. Department of Agriculture defines a food desert as "a low-income census tract where a substantial number or share of residents has low access to a supermarket or large grocery store." Lincoln Park, located a few miles west of downtown Duluth, fits the profile for several reasons.

More significantly, there is no full-service grocery store in Lincoln Park. In fact, the last major grocery store closed more than 30 years ago. Convenience stores, gas stations, and fast food restaurants are in the neighborhood, but residents must travel outside Lincoln Park to find a store with a good selection of reasonably priced, fresh, healthy foods. No part of the Lincoln Park neighborhood is even a one-mile walk from a grocery store.

"This is a problem because a lack of access to grocery stores is associated with higher rates of obesity and diabetes as people substitute available food for healthy food," the study report says.

With assistance from Josiah Grover of Ball State University and Gina Hollinday of UMD, as well as UMD students and a local community group (Volunteers Caring and Patrolling), Pine and Bennett's research was completed using four study methods:

As noted, Lincoln Park has a $5.3 million leakage factor — meaning residents are spending those dollars at stores outside their community's trade area. "It's not likely that a grocery store would be able to capture all of the estimated $5.3 million, but it could attract a good portion of those dollars if the store was an appropriate scale," the study report says.

The study also found that:

Study authors proposed several solutions to Lincoln Park's food access problem, including the following. The community's hope is any or all of these options could be implemented:

HDAC has enlisted Pine and Bennett to help the group look into the feasibility of these and other solutions with the aid of a grant from Blue Cross/Blue Shield of Minnesota. They will start that work soon.

It took years for the food situation in Lincoln Park to deteriorate, so things won't happen overnight. But steps are being taken.

As a member of the Extension staff, Bennett sees the Lincoln Park study as a good demonstration of how Extension fulfills its mission "to make a difference by connecting community needs and University resources to address critical issues in Minnesota."

Both he and Pine are gratified by the community activity their study sparked in Lincoln Park. "Solutions are difficult to implement without the research to back them up," Pine says. "Knowledge is power, and it's important to get solid data so people can decide what to do."