Southeast Minnesota’s economy continues to grow, with an increasing need for workers to fill jobs (ABC 6 News). The Destination Medical Center, a public-private partnership promoting the Rochester area as a world destination medical center, aims to create more than 30,000 new jobs and attract more than $5 billion in private investments to Rochester. With steady support from the University of Minnesota Extension Southeast Regional Sustainable Development Partnership (Southeast RSDP), the Southeast Minnesota Together initiative is convening conversations to address the worker shortage and support the collective well-being of communities in the region.

“A lot of small towns in Southeast Minnesota were concerned and curious about what was going on in Rochester in the early days of Destination Medical Center,” said Erin Meier, Director of Green Lands Blue Waters and former Southeast RSDP Executive Director.

Meier and Southeast RSDP board member and RSDP Statewide Board Chair Robert Cline played a key role in convening early conversations about changes taking place in Rochester and the broader impacts on the region. Meier realized from early community listening sessions that Southeast RSDP could play a role in continuing to engage small communities. “They were asking the kinds of questions about the region that we are also interested in addressing,” she said. 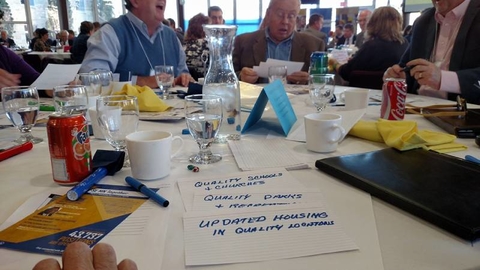 As goals became more defined, the Southeast RSDP worked with a core volunteer group to seek support from the Southern Minnesota Initiative Foundation. In 2015, Southeast Minnesota Together was founded as an experiment in cooperative action to address the region’s workforce shortage. The group aimed to find ways to work within towns across the region to address issues around transportation, housing and child care services. “An early goal was to start organizing locally and have discussions to balance the power with Rochester,” Meier said.

According to Southeast RSDP Executive Director Okey Ukaga, the Southeast Minnesota Together initiative fits well with RSDP’s role as a collaborative partner. As a founding collaborator, Southeast RSDP helped volunteers examine the initiative’s purpose and turn it into actionable goals. “Our job is to utilize University of Minnesota resources to meet community-identified needs,” Ukaga said. “We are pleased to be instrumental in forming and supporting this regional effort that continues to enable communities to come together.”

Southeast Minnesota Together convenings have been well-attended. “Participants have improved the experience of ‘thinking globally’ across Southeast Minnesota, ‘acting locally’ in their immediate communities, and partnering with the University of Minnesota in both regards,” Ukaga said.

For example, through a pilot project with the Minnesota Design Center and Southeast Minnesota Together, the city of Wabasha wanted to enhance bike use and walkability for residents. As a result of a community conversation that included Southeast Minnesota Together team members, Southeast RSDP representatives met with the mayor and other stakeholders to discuss the project idea and develop an action plan. Based on these conversations, the city applied for and was awarded support from the Southeast RSDP to implement the Wabasha Active Living Community (WALC) project. The project is a two-phase community engagement, research and outreach effort that will inform planning and implementation of active-living opportunities for community residents and visitors, with a focus on walking and biking.

In Phase I, the University of Minnesota is assisting with a community event that invites diverse participation on the topic of walking and biking. A University student is conducting local research on the issue and developing a graphical representation of trails, paths and related assets that promote walking and biking. In Phase II, a University student will conduct research on electronic platforms (e.g., apps, websites) as well as print publication formats (e.g., pocket maps, signage, overlays) that can be used to most effectively understand project outcomes on target audiences.

The significance of small towns

“It is so significant to bring [these conversations to] small towns around the region,” Meier said. “These towns are overwhelmed.”

According to Meier, many small towns have been impacted indirectly by the boom in Rochester and may not have the staffing capacity to address the local impacts of regional influences. Southeast Minnesota Together creates opportunities for small town staff and representatives to learn from one another and collaborate across the region.

According to a 2017 article in the Rochester Post Bulletin, “While DMC is tightly focused on Mayo and Rochester, the potential regional impact of the $6.5 billion economic development program is immense and across many sectors of the economy.”

“We needed to address issues that had solutions, and needed to be able to work together,” said Jane Olive, Southeast RSDP Board Chair. Olive explained that at the time Southeast Minnesota Together formed, small town businesses were not getting enough traffic and struggling to retain employees. Other infrastructure challenges included transportation, child care availability for working parents, and access to affordable housing.

Core team members strive to make discussions inclusive and accessible to diverse populations. “We have tried to move the convenings around, as we are aware of the size of the region and want to be sure we are respecting the time of the attendees,” said Extension and RSDP’s Sarah Topness, who provides administrative and communications support to the initiative. “Thanks to our sponsors, we have not needed to charge admission which, in turn, gives more people on small budgets the opportunity to join the conversations.”

Since its founding in 2015, Southeast Minnesota Together has supported community conversations on economic, environmental and social long-term goals for the region. The initiative now engages a broad team of regional leaders and additional sponsors and holds a variety of convenings around the region.

“Southeast Minnesota Together is made up of a very active and engaged group,” Topness said. “They are constantly bringing together communities in the region with regular convenings and monthly meetings that are well-attended from our core team. Each one of our core team members brings a valid asset to the team and works on a majority of volunteered time.”

Southeast RSDP continues to support Southeast Minnesota Together, with other organizations and units in Extension stepping in to provide substantial support as the initiative has grown. Significant outreach, administrative and communications support is provided by the Southeast Service Cooperative, Extension Community Economics’ Jennifer Hawkins, and Extension and RSDP’s Topness. In addition to Ukaga, Extension Regional Director Lisa Dierks and fellow Southeast RSDP board members engage in Southeast Minnesota Together convenings and serve on the core leadership group. The University of Minnesota College of Design Minnesota Design Center contributes community planning expertise, with representation on the core team by Mary Vogel, Senior Research Fellow and former Director of the Center for Changing Landscapes and RSDP. Core team members also continue to pursue additional funding sources for the initiative.

“This is a good example of RSDP working with other partners at the University and in the community to help Southeast Minnesota bring their community interests together to examine their situation, plan their future and move forward,” Ukaga said.

Meier concurred. “It wouldn’t have happened without the [Southeast RSDP].”

“It can continue to be a forum for ongoing issues that may arise. People can see new ones come up through these conversations,” Olive said. “Convenings are really important. They have the same interest, and you almost get a sigh of relief when someone brings up an issue. There is no point in small communities solving the same problem separately.”