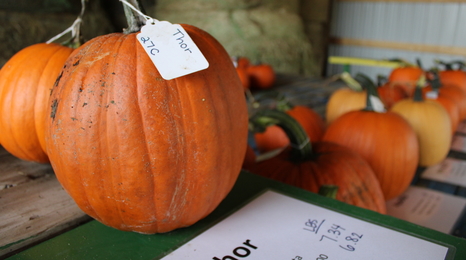 This year, they got new support from a partnership between Annie Klodd, University of Minnesota Extension fruit and vegetable educator, and grower Rod Elmstrand. They studied 32 pumpkin varieties to evaluate traits that make them well-suited to Minnesota patches. Klodd and Elmstrand shared findings with 30 state pumpkin growers recently at Elmstrand’s farm, Rod’s Berry Patch near North Branch. (Read Farm to table—and front porch in Source magazine for more on the study.) Here’s a bit of what they learned and some tips for pumpkin customers.

Is there a Great Pumpkin?

There is in the Extension trials. It’s Kratos, a high-yielding variety that’s perfect for jack-o-lanterns. Kratos consistently weighs in at about 18 pounds. Klodd’s favorite? That’s Specter, a variety that produces lots of white-yellow offspring and is good for decorations.

Spartacus, until recently known as SPU3269, emerged as a favorite in the Extension-Elmstrand pumpkin trials for its firmness, strong stem and overall good looks. Pumpkin names come from the companies that develop new varieties. Did you know there are pumpkins called Mrs. Wrinkles, Warty Goblin, Magic Lantern, Early Giant and Thor?

For longevity, carve your pumpkin upside down by hollowing it out from the bottom. That way the flesh won’t sink in from the top. It takes a little extra work to position the candle; carefully lower the pumpkin on top of it. Now’s the time to cure pumpkins by placing them in a dry, sunny place like a doorstep, balcony or sunroom. Don’t bring them in at night unless temperatures are expected to stay under 28 F. Without curing, whole pumpkins won’t last much more than a few weeks.

It was a stressful year for Minnesota pumpkins

Yield was down in many parts of the state. Rainy conditions both during the brief period in which pumpkins are pollinated, as well as into the fall, contributed to pumpkin stress.  Studies like those carried out by Klodd and Elmstrand can help growers deal with weather and other challenges to their produce.

“The event at Rod’s farm was a good opportunity to get information from Extension and meet growers from around the state,” said Dave Stish, a University of Minnesota alumnus who has grown pumpkins for 41 years at his farm in Royalton.  Stish’s favorite pumpkins? Early Giant and Early King.

Why not enjoy a delicious pie, and more, from Minnesota pumpkins year round? Extension’s food safety team has tips for processing pumpkins for longer-term use.