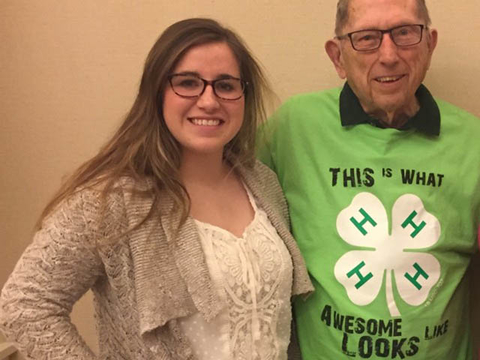 “Treat all people the same, no matter where they live,” says lifelong advocate for 4-H.

He may already have over 75 years of involvement in 4-H youth development, but Jim Kemp is thinking about the future. “I want to continue to expose teenagers to leadership opportunities, whether they live outside Hutchinson or in downtown Minneapolis,” says Kemp, a retiree who has spent his life in public service.

“We want to empower young people to think about ways that they can solve the world’s problems,” says Jacquie Lonning, Extension 4-H citizenship and leadership program director. “But in order to do that they need to learn to work together, understanding diverse perspectives.”

Madison Muir is a University of Minnesota student from Hallock, Minn., who served as a 4-H State Ambassador. “It was exciting to go from developing those skills in my first year to using the skills to lead a team in my second year,” she says. “I also had a chance to meet with Jim Kemp and share my ideas with him about opportunities he could support to make the program even better.”

Interest in reaching beyond himself

Growing up on a dairy farm in Colorado, Kemp’s earliest projects included dairy, turkeys, sheep and pigs, but he also found passions for forestry, foods and health. With the guidance of a county educator, he started a dog training club for kids in a nearby suburb in order to reach out beyond the farms.

“All young people need to present themselves, speak, find information, assemble and organize,” Kemp says. After he developed leadership skills as a Colorado 4-H’er, he went to work for 4-H in Colorado, then Pennsylvania, Indiana and eventually Minnesota.

It was in Philadelphia where his interest in reaching out beyond the farms gained strength. “We would go to the row houses, where the bricks had tumbled down,” he says. “We hauled away the bricks and built gardens. We used any space we could. One was a triangle of soil between the row houses and the railroad tracks. Kids would give tours of their garden and the train would go by.”

It didn’t take long after he arrived in Minnesota before he was gathering kids from across Minneapolis and starting urban gardens in Theodore Wirth Park, helped by donations of seeds by local companies. It was just one of his many initiatives that reached young people through Extension 4-H. In 2009, after countless lives touched, Kemp was inducted into the National 4-H Hall of Fame.

Kemp’s commitment to 4-H will continue beyond his lifetime through the James C. Kemp 4-H Ambassador Endowment fund. In addition to his current gifts to his fund, he established four charitable gift annuities with the University of Minnesota Foundation, which pay him a fixed, guaranteed income for life. The remaining charitable gift annuity proceeds will benefit his endowment fund at the end of his lifetime. To discuss giving options, contact Jane Johnson.

1955: Traveled to Ireland and Northern Ireland with the International Farm Youth Exchange (IFYE)

1990: Initiated into University of Minnesota President’s Club for gifts made to 4-H over several years