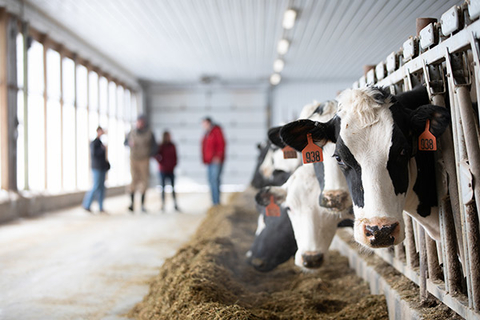 The average American is now at least three generations removed from farming. In a “normal” year, the closest many Minnesotans get to agriculture is visiting the livestock barns at the county fairs or the state fair.

So it doesn’t come as much of a surprise that the complex systems underpinning the U.S. food system aren’t widely understood. COVID-19 exposed its vulnerabilities.

“Consumers had to go without. Farmers faced emotionally and sometimes financially catastrophic losses, even with some government financial support,” wrote Extension’s Joleen Hadrich, Megan Roberts and Brigid Tuck in a commentary published Sept. 4 by the Star Tribune. Hadrich is an agricultural economist, Roberts is an agricultural business management educator, and Tuck is senior economic impact analyst.

Earlier in the month, Hadrich was a guest for an hourlong conversation on Minnesota Public Radio. Her appearance gave Minnesota listeners another opportunity to get insights into the role of the farmer in the food system. Beyond that, she shared key observations on the realities of farming.

“Agriculture, for farmers, is their job but it’s also their identity,” she told guest host Chris Farrell, also an economist.