Spiders are closely related to mites, ticks and scorpions and are collectively known as arachnids.

Both spiders and insects are arthropods, meaning their skeletons are on the outside of their bodies (exoskeleton).

Hunting spiders are outdoor spiders that may wander indoors accidentally.

Spiders very rarely bite people. Most spiders are harmless to people and are incapable of biting, even when coaxed.

Most people and even medical doctors over-diagnose “potential spider bite” based on symptoms such as redness, swelling, cramps, severe pain, or even necrotic lesions.  These are usually caused by other factors including diseases or medical conditions and bacterial skin infections.

Neither black widow spiders or brown recluse are native to the upper Midwest and are rarely encountered.

Descriptions and pictures of different spiders

Open a drawer to see pictures and descriptions of common spiders found in Minnesota. Sizes given for each spider represent the length of the body not including legs. Read about the difference between web-building and hunting spiders above, under "Identifying common spiders." 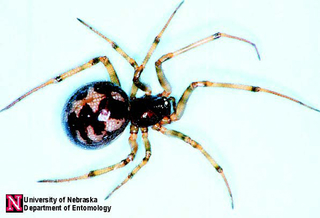 Cobweb spiders are members of a large group called the comb-footed spiders and are very common both outdoors and indoors.

They are brownish or grayish small to medium-sized spiders (about 1/8- to 3/8-inch long) and have a rounded abdomen and a small cephalothorax.

They do not move a lot and build irregular, tangled webs for which the group is named.

Webs are built in undisturbed, out-of-the-way places such as wood and stone piles and in quiet areas of buildings such as basements. 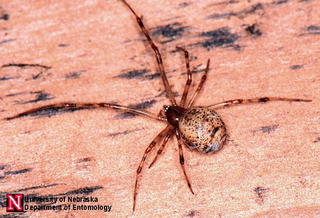 A common type of cobweb spider found indoors is the American house spider (common house spider). It is grayish to brownish with chevron-like markings on its abdomen and a body length of over ¼ inch.

It builds a loose tangle of cobwebs in secluded and undisturbed areas of the house such as basements and crawl spaces. 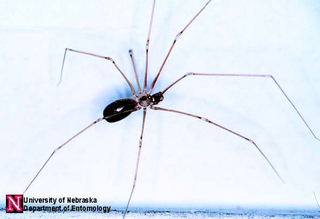 Cellar spiders are common in dark secluded places such as crawlspaces, basements and cellars.

Cellar spiders are 1/3 to ¼ inch long, pale gray to light tan in color and have long delicate legs (resembling the daddy-longlegs).

The cellar spiders build a loose, irregular web in corners near the ceiling or floor.

The marbled orb weaver spider is a striking spider that attracts attention because of its typical bright orange color, though specimens vary from orange to beige to pale yellow and white.

Orb weavers do not do well when they fall to the ground. They move very slowly and have very poor vision, even for a spider.

They are extremely unlikely to bite people. 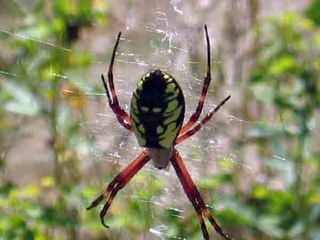 Argiope (ar-JYE-o-pee) spiders or garden spiders are also orb weavers. The large, black and yellow spiders usually are found in late summer in the center of big, round, flat webs.  They have bodies measuring one inch long and, counting their legs, can be several inches in length.

The black and yellow argiope has a black body and yellow markings on its abdomen, somewhat resembling flames. 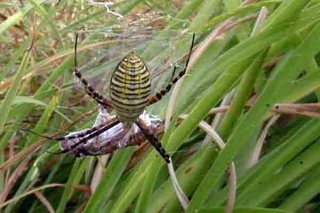 The banded argiope has a series of thin yellow, white, and black transverse (side to side) bands on its abdomen. Garden spiders are typically found building their webs in gardens or in tall grassy areas.

People assume because these spiders are large that they must be dangerous to people. They actually are very shy (as nearly all spiders are). They stay in their webs, eating insects they capture and rarely, if ever, are found off of them.

These spiders are not dangerous to people and should be left alone.

Funnel weaver spiders are generally brownish or grayish with stripes near the head and a pattern on the abdomen.

They have long spinnerets and are moderate-sized (¾-inch long).

They produce a flat, horizontal web with a small funnel-like retreat off to one side.

Webs are commonly built on the ground, around steps, window wells, foundations, and low shrubs.

Barn funnel weavers (a type of funnel-web spider) have a pair of dark stripes behind the head and may build webs in corners and closets indoors.

Grass spiders (a common funnel weaver) build their horizontal webs in the short grass of lawns. They have three light colored and two dark colored stripes behind the head. 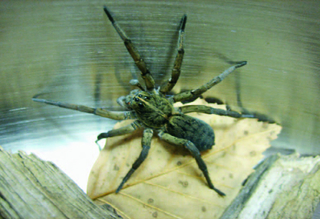 They are found on the ground or under stones in a variety of habitats, such as woodlands, grassy meadows, beaches, landscapes, gardens and fields. Some even live underground.

They commonly hunt during the day or at night when it is warm.

Wolf spiders are alarming because of their large size and rapid movements. They are not aggressive. 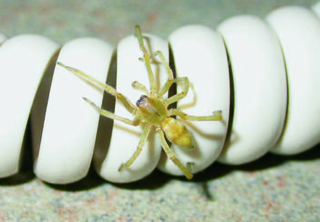 Sac spiders are normally found on foliage or on the ground. They are small to medium-sized spiders (1/5- to 2/5-inch long) and are usually yellowish or light-colored.

Sac spiders hunt at night, feeding chiefly on small insects, and hide during the day in a silken tube or sac, from which they take their name.

They do not construct webs. Outdoors, they usually roll up leaves into a tube or may construct a retreat under stones.

Inside buildings, sac spiders are found in retreats in a variety of places including high up on walls near ceilings. 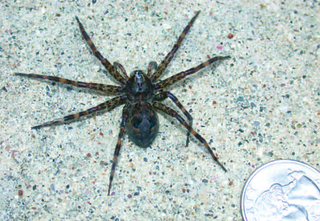 Fishing spiders are typically seen near ponds, swamps, or slow-moving streams, but some may be found at considerable distances from water.

Fishing spiders are the largest spiders in the Upper Midwest (1-inch long). With legs spread out, some fishing spiders cover as much as 4 inches.

They are generally dark-colored, usually brownish or grayish, with white markings.

Fishing spiders can “skate” across water and can dive underneath to capture prey.

They also can catch tadpoles, small fish and other small vertebrate animals. 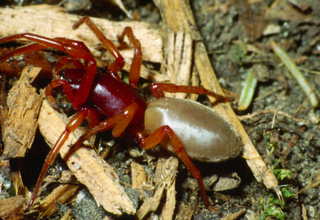 Sowbug spider, also known as the woodlouse hunter or the dysderid spider, is an introduced species that is now common in the United States.

This medium-sized spider has distinctive coloration: the cephalothorax is purplish-brown, the abdomen is grayish-white, and the legs are orange.

Unlike the majority of spiders, the dysderid spider has only 6 eyes.

The fangs are quite large and project forward.

They wander at night in search of food and are ground-dwellers commonly found under rocks and debris.

Their preferred prey are sowbugs and pillbugs. 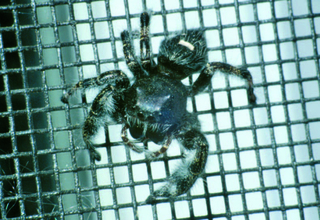 Jumping spiders are compact, medium-sized spiders that leap on their prey, often jumping many times their own body length.

They are active during the day and are often found on windows, ceilings, walls, and other areas exposed to sunlight. They are about ¼- to ½-inch long and dark-colored with white markings.

Some can be brightly colored, including some with iridescent mouthparts.

These spiders move quickly in jerky, irregular motions and can run sideways and backward.

Jumping spiders have the best vision of spiders (have large middle eyes), seeing objects up to eight inches away. 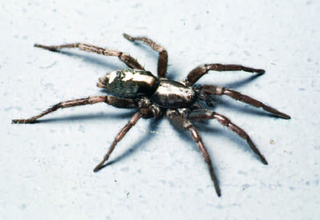 Parson spider is a medium-sized spider (½-inch long) with a brownish body and gray abdomen with a white band running down over half the length of its abdomen.

Parson spiders move quickly. They actively hunt at night and chase their prey.

During the day, they are found outdoors under stones or loose bark.

Indoors, they hide under objects or in cracks or crevices.

They have been known to bite if trapped inside clothing or bedding. The bite can be painful and may cause allergic reactions in some people. 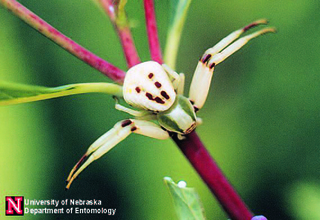 Crab spiders are small to medium-sized spiders (1/10- to 2/5-inch long) ranging in color from yellow or red to brown or gray.

The first four legs are longer than the back four and are held out to the sides giving a crab-like appearance. They can walk forward, sideways, or backward.

They are passive hunters; they wait motionless and feed on insects that pass by closely.

They are rarely found indoors.

How to deal with spiders at home and outdoors

Control of spiders is best achieved with an integrated approach that includes different non-chemical methods and occasionally insecticides.  The type of spider can influence how you control it so it is important to identify the spider that is found.

Remember that spiders are not harmful so tolerate spiders when possible.  When just small numbers are found, the easiest control is to capture and remove them.

Elimination of all spiders from a home is difficult and unnecessary. Properties located in areas where insects are numerous, such as by rivers, lakes, or fields, are more likely to have large numbers of spiders.

Each situation is unique, but the following guidelines describe the integrated techniques that can be used to control spiders.

If you have a very large infestation of spiders and cannot control them otherwise, you can apply insecticide to cracks, gaps and other places where spiders may hide. Surface treatments and fogs are not effective.

These products are commonly found in ready-to-use aerosol and liquid forms.

Spiders are beneficial and an important component of the ecosystem. Getting rid of spiders in the lawn, landscape and garden is not recommended.

Use the following methods to prevent wandering spiders from getting inside your home:

You may lightly apply a broad-spectrum insecticide on the outside of your home to reduce invasion by wandering spiders. Spray under siding, in cracks and crevices, and other places where spiders may hide. Make sure the insecticide is labeled for use on the exterior of buildings.