Small, orange–colored eggs are laid in the soil. 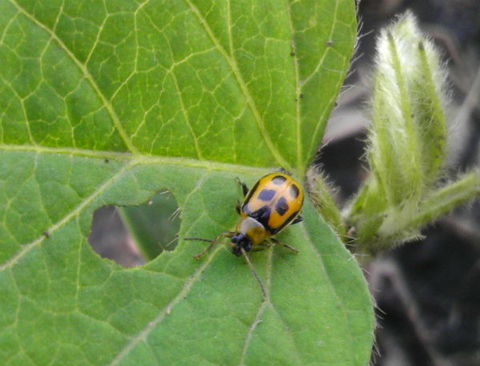 Larvae are white–colored with a brown head, less than ½ inch long, and occur in soil.

Adults overwinter under leaf litter near or within soybean fields, and emerge from mid–May to early–June. Adults feed on alfalfa and clover until mid–June, at which time they move to their preferred host, soybean. As adults colonize soybean, they will mate and lay eggs at the base of soybean plants. Developing larvae feed on soybean roots, and within three weeks the 1st generation of adults emerges and feeds on soybean (often in July). In southern Minnesota, a second generation of adults is produced (late August).

Adults chew holes in leaves. Though soybean can compensate well for defoliation, heavy infestations can cause yield loss.

Larvae feed on soybean roots and nodules, but impact is assumed negligible.

Begin scouting plants at the seedling stage and continue through pod and seed development.

Visually inspect at least 10 plants spread throughout the field for adults and defoliation. Pods should also be inspected for injury later in the season.

To estimate percent defoliation, examine a minimum of 10 plants: